By popular demand, here is a quick explainer on different styles of chasubles.

As mentioned in the first GRAVE post about chasubles, the original priestly vestments were regular street clothes. Principally, the priest would wear a heavy outer cloak that was conical (not comical) in shape and extended down to his ankles.

As you can guess, this shape made it a little difficult for the priest to extend his arms or elevate the Blessed Sacrament. It was the deacon’s job to assist the priest by lifting up the sides of his chasuble, to make movement a little easier. This still occurs today in certain rites, even though it’s usually not a practical necessity anymore.

After the 13th century, styles began to change and there was a movement to reduce the amount of fabric hanging over the priest’s arms. This happened gradually across Europe but resulted in some very small chasubles.

Saint Charles Borromeo, the archbishop of Milan, wrote a lot and in great detail about vestments. Specifically, he worried that tradition and theological symbolism was being cast aside for trendy, small vestments. He advocated for a type of chasuble we can see more-or-less in this painting of St. Idelfonso, by the Spanish master El Greco. (click to enlarge)

One variant of the “Borromean” chasuble is growing in popularity today. It is named after St. Philip Neri. Here’s an example recently completed by my company, Granda Liturgical Arts.

We can skip ahead to the 18th century and see how fashions progressed to favor a very small chasuble, in spite of St. Charles’ writings. These bad boys would’ve extended only down to the priest’s knee, at the longest.

This sort of vestment is sometimes called the “Roman chasuble” today, but this is not very precise. Others call it a “fiddleback,” which I use just because it is descriptive.

In the 19th century, the style began to trend back toward ample vestments, similar to the ones mentioned at the beginning of this post. In a funny twist, the Vatican did not like this and issued a number of decrees stating that priests should stick to the “traditional” fiddleback chasuble, which really was not that traditional at all. These were widely ignored and, by the 1960s, priests were free to wear basically whatever they wanted.

Today we see these flowing chasubles almost exclusively. At Granda, we call these cuts the “semi-gothic” and “gothic” styles, though we do make other styles as well. 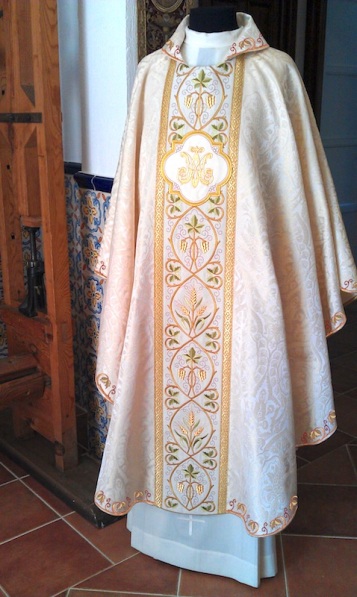