Church Madness is brought to you by Granda Liturgical Arts. Since 1891, Granda has been “drawing fresh water from the deep well of tradition” to design and craft beautiful vessels, vestments, and homes for Our Lord. Find out more at USAGranda.com.

The atmosphere is electric here at Guardini Arena for Art & Liturgy’s National Churchpionship! Voters from around the country have winnowed down the national bracket of 64 beautiful churches to the final two, separated by a mere 270 miles in America’s heartland.

St. Francis de Sales Oratory, administered by the Institute of Christ the King Sovereign Priest, comes into this matchup a slight favorite. This church — the second largest in St. Louis, “the Rome of the West” — is widely known for its dedication to traditional liturgy and beautiful liturgical arts. Also, the Canons wear some RAD blue cassocks.

Their opponent, St. James Church of the Archdiocese of Louisville, is no slouch. Its 80-foot dome, recently restored, is the most impressive in this year’s tournament. All of the basketball teams in the state of Kentucky were sent home early from the real March Madness tournament, and so St. James may have the advantage of a hometown ready to redeem what’s been an ignominious few weeks for the Bluegrass State.

If our two competitors would like to place a friendly bet on the results — Kentucky bourbon and, I don’t know, Imo’s Pizza or something — I think that’d be pretty cool.

Only one can be America’s Most Beautiful Church! Who will prevail? You decide: vote now! 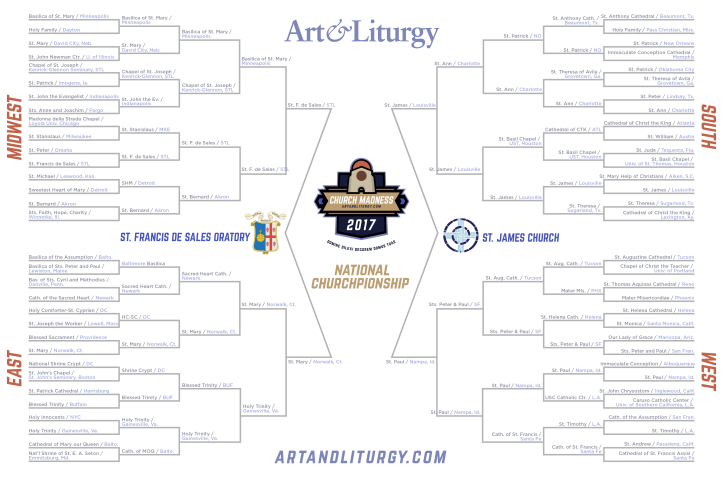 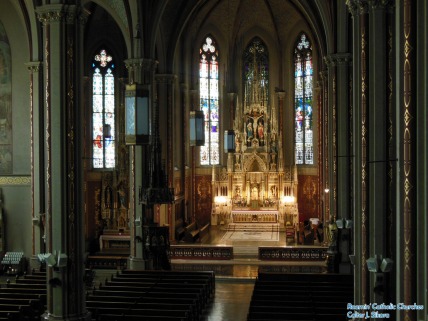 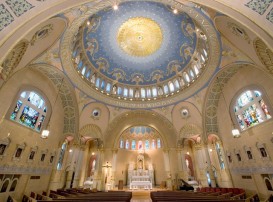 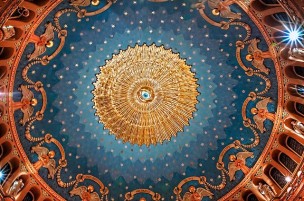 Check back on the afternoon of April 7 for the announcement of the National Churchpion!

We were struck by lightning yesterday which put out parts of our electrical systems, including the bells and the clock of the church (only recently restored after decades of inactivity). Please say a prayer for the protection of St. Francis de Sales Oratory, an important monument AND a very active apostolate of the Institute of Christ the King Sovereign Priest.

A parishioner of St. James emailed me with some additional information, which I am adding here because it is awesome.

…While you mention our beautiful dome, even more impressive is the Byzantine-inspired “eye of God” in the interior of the dome. It’s a feature that everyone comments on and remembers. However, even more significant is that we are the only church with an “eye” like this in the U.S. and only one of two in the world – the other being the former Greek Orthodox Church of the Hagia Sophia in Istanbul, Turkey.

I’ve also added a photo of this nifty little detail to the gallery for St. James. 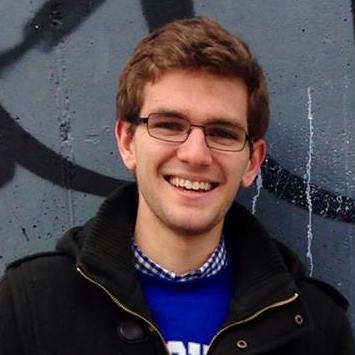